Hello all you dark darlings.  Having just completed this incredibly sexy, naughty cowboy novel, I simply had to share. 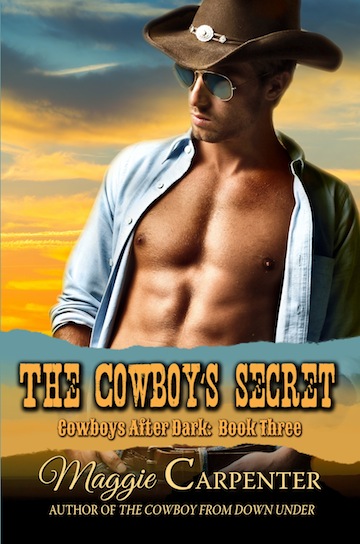 It has been my experience, that when a Dominant suggests you do something, then tells you to do something, then warns that if you don’t do that something in a tone that makes it clear he is running out of patience, it’s probably best to – uh – do the something!

Clint slipped in beside her, turned off his bedside lamp, and turning to face her he propped himself up on an elbow. The fire was still burning but the flames were low, making his face barely discernible.

“Why are you still wearin’ that sweatshirt?” he asked softly.

“Rule number one, when you’re in bed with me you’re naked.”

“Oh, right,” she said hurriedly, and sitting up she pulled it over her head, throwing it on the floor. “Better?”

“Now go back to sleep,” he directed, and pulling her against his chest he hugged her tightly.

“You’re not mad?” she murmured.

Sighing deeply she sank into him, nuzzling her cheek against the soft bristles of his chest.

“I just want to know about you. Is that so terrible?”

“It’s not terrible, but,” he paused, taking a deep breath, “I’ll tell you things as we get to know each other. Don’t be impatient. When you’re gallopin’ up to a jump it’s all about timin’, you wait to see your take off point; this is the same, you’ll know more when the time’s right, I promise you.”

“Okay, but I can’t stop being curious, it’s just in my nature,” she muttered.

“Shush, enough, go back to sleep.”

“Dammit, Amelia, we’ll talk about all this in the mornin’.”

“If you don’t stop talkin’ and go to sleep right now,” he interrupted, “I’ll turn on the light and spank your ass bright red. I’m warnin’ you, just one more word, and I mean just one.”

Bolting upright he switched on the beside lamp, jerked her across his lap, and began spanking her with rapid-fire slaps.

“Damn, woman, when are you gonna get it through that gorgeous head of yours that I mean what I say?”

“You just had to keep pushin’ the envelope, test and test and test,” he scolded, his hand landing smack after smack, “and I guess your bottom is just gonna have to walk itself around red and stingin’ until you get it.”

He paused, running his hand over the scorched skin.

“Amelia, I know you’re smart as a whip, so you can’t be playin’ dumb with me. You touched the stove, and now you’re gettin’ burned.”

“What do you mean, touched the stove,” she whimpered.

“You’re like a little kid; don’t touch the stove, it’ll burn you, but the curious kid doesn’t listen and touches the stove.”

“A few more for good measure, then you go to sleep, you hear?” “

“Ooooh, yes, Sir,” she grumbled, wriggling at the thought of it.

Ignoring her kicking legs and high-pitched squeals, he delivered several more slow, hard slaps to her hot, stinging behind.

“That’s it. Crawl off my lap, lay down, and go to sleep, and not another word.”

As she sidled off his thighs she paused, kissed him on the cheek, looked at him longingly, then slipped between the sheets.

Ouch, ouch, that hurt. I bet he keeps all his promises.  Why did you test him?   Couldn’t help myself. Weird though, I’m really glad I did, and as she closed her eyes, a slight, satisfied smiled crossed her lips.

Clint rolled close to her, draping an arm across her body. He’d spanked her hard because he’d had to. He wasn’t even sure why he’d felt he needed to land his hard so smartly, he just did; it was instinct, and his instinct was never wrong.

You’re adorable, and naughty, and defiant, and you’ve needed someone like me for a long time. No wonder you’re still single. I’ll bet a lot of men have disappointed you. Don’t worry, sunshine, I’m not like them, I won’t let you down.