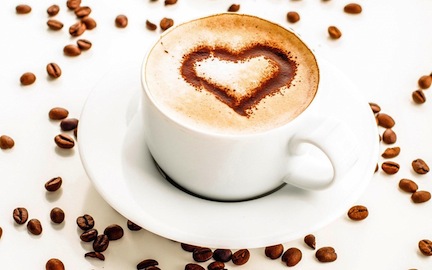 She took a deep breath and pushed open the door.

It’s just a cup of coffee. No big deal. He doesn’t know my real name, he knows nothing about me, well, not really, except that we share a crazy kink. God, I wish I could stop shaking.

But it wasn’t just a cup of coffee; it was meeting him, for the first time.  The guy with whom she’d exchanged too many emails to count, the guy whose photograph and literary wit had tickled her fancy…and…the guy who had assured he wouldn’t hesitate to spank her if they clicked.

I know it’s why I joined the ‘Find Your Friendly Spanker’ site, but I didn’t think I actually end up agreeing to meet someone. Shit. Am I really going to stay here and do this? Shit.

The truth was, she didn’t want a friendly anything. She wanted to meet someone special, someone who made her stomach do that thing…that thing she hadn’t felt in a very long time, and she still didn’t believe it was possible via a very expensive, small square box.

Summoning the courage to stay,  heart thumping she ordered coffee, her eyes constantly darting across the room every time she heard the jangle of the bell over the door.  She was early, but that was on purpose. She wanted to be settled with her latte when he walked in. No awkward silence standing in line; she couldn’t abide standing in line. Even with friends it made her uncomfortable.

The coffee shop wasn’t a Starbucks, or a Peets, or any kind of chain. It was a neighborhood cafe, a family owned french bakery that had outstanding pastries and the best coffee in town, and it was popular.  She’d counted on the popular part, hoping the company of people milling about would prevent any meaningful conversation, but the stars had not aligned; the place was virtually empty.

Picking up her hot drink she chose a place by the paned windows, and setting her thick mug on the table she sat down, taking a long deep breath.

Feeling a tad more composed she wrapped her fingers around the sugar jar, tipped it up, and absently watched the white crystals create a hole in the center of the heavy foam.  Slowly stirring she glanced out at the parking lot. A gleaming silver motorbike rolled into a spot, and a tall, leather-clad man climbed off, balanced the heavy machine on its kickstand, and pulled off his helmet.

Good grief, look at him. He’s a walking cover for a romantic spanking novel.

His hair wasn’t long or short, but hit his collar at the back and barely covered his ears;  he ran his fingers through it, and the soft curls seemed to fall perfectly into place.

Why do so many guys have hair like that?  All they have to do is jump in the shower, towel it dry, and hey, presto, perfect.

He unzipped the top half of his jacket, which, she noticed, wasn’t covered in garish studs or chrome, but was wrinkled and worn and sexy as hell, and began walking quickly towards the cafe. As he neared she squinted; he looked vaguely familiar.

Wait, is that him? Can’t be, the guy in the photo had really short hair, unless, maybe, it was taken a while ago.

Her heart began its thumping again, and holding her breath she let her gaze follow him. He turned the corner and walked through the door, tinkling the bell above his head.

She watched as his eyes scanned the room, and when they touched hers he broke into a smile and began ambling towards her.

Shit, dimples, he’s even got dimples.