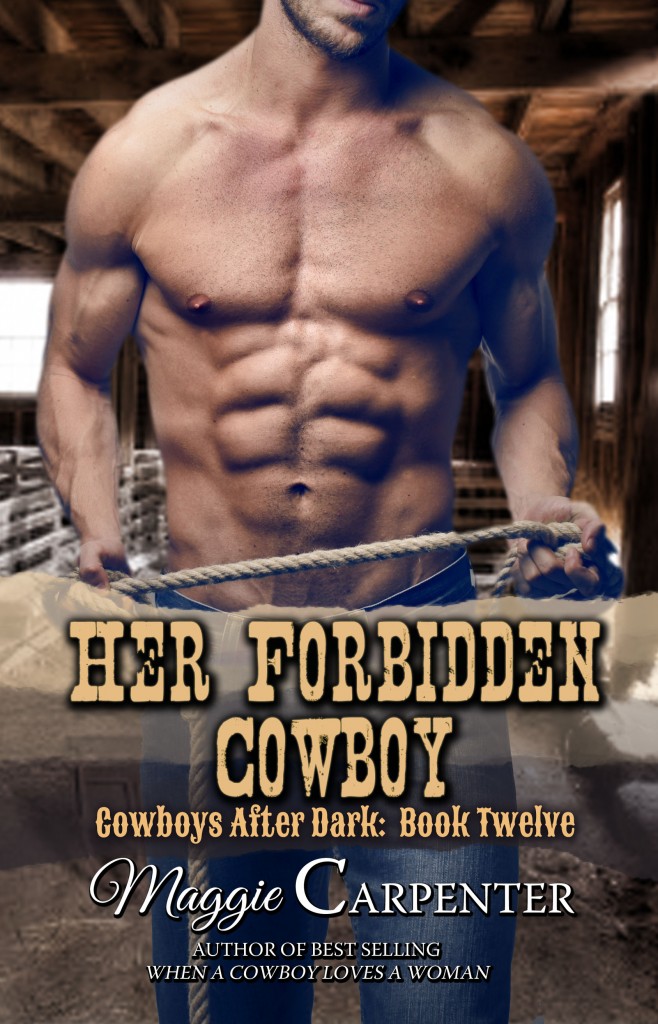 When Cathy Coleman moves her horses into Sampson’s Boarding Stables, she falls in lust with Scott Sampson, the barn’s owner. In an effort to get him to notice her, she starts leaving her belongings scattered around the barn. It works. Scott is forced to constantly seek her out, insisting she be more responsible, but to her dismay he shows no desire to spend time with her outside the barn. Months pass, and Cathy is utterly exasperated.

Though Scott has had to reprimand her continuously, he harbors a secret longing to take her into his arms, clutch her hair, and kiss her fervently, but in spite of his intense attraction he refuses to break his golden rule. Don’t get involved with boarders. But when her messiness causes him to have an accident, he decides enough is enough!

To her shock, she finds herself in his office, over his lap, getting her bottom well and truly spanked.

As she bolts from the room, he is more angry with himself than with her. She is under his skin, and he has to admit his need for the willful young woman is overwhelming, but how she will react to the stunning and unexpected chastisement?

Days later she returns, and it is immediately obvious he has spanked his way into her heart, but he makes it clear he will put her over his knee whenever she misbehaves. With his rules in place, their romance begins, and Cathy quickly learns that Scott not only has a hot hand, but is artful with a length of rope.

Their love blossoms, and Cathy discovers she has an appetite for Scott’s salacious decadence, but Cathy comes from a socially elite family, and when her mother, Marianne Coleman, finds out her only child is dating a cowboy, she is furious. Catherine is meant for a dignified man of stature and means!

What dangers does Marianne pose? Will Scott and Cathy be able to survive the manipulations of the over-protective woman, or will Cathy have to choose between the man who has captured her heart, and the family she loves?

Cathy watched him slowly remove his clothes. It was maddening. She’d wanted him to pull of his jacket, throw it on the floor, then rip away his shirt, but she sensed he knew that, and was deliberately taking his time, teasing her, making her wait, but never had her impatience felt so good.
She knew she was squirming on the bed, she couldn’t help it, but then he peeled off his shirt, and she froze like a deer in headlights. It was no wonder his chest had felt like steel, and his arms had seemed so strong as he’d gently held her. She’d seen a fit man before, her college sweetheart had been fanatical about working out, but Scott’s body put him to shame.
His washboard stomach sat below hard-cut pecs, his arms looked as if he could bench press a car, and as he slid off his jeans and boxers, her eyes fell to his swollen cock.
“It’s all for you, sugar,” he murmured, moving to stand by the bed, “but you’ve gotta make yourself naked for me.”
“How can you be so calm?” she whispered.
“Who said I was calm?”
“You seem like you are.”
“Believe me, I’m not calm, I’m controlled.”
“Oh, my gosh,” she stammered, his comment sending a rush through her entire body.
“I’m waitin’,”
Wordlessly, she hurriedly pulled the sweater over her head, then rolling on to her stomach, she looked over her shoulder at him.
“Would you do the honors?”
Leaning over her, he slowly pulled down the zipper and unsnapped her bra. He was about to trail his fingers across her skin when she abruptly kneeled up, frantically pulled off her dress and shimmied her hose and panties down her legs, then flopping on to her back, she stared up at him, raising her open arms.
“Please?” she bleated. “Please?”
“Stretch your arms above your head and spread your legs.”
She paused for a moment, as if wrapping her brain around his instructions, then did as he said.
He watched her as she thought through what was actually happening. He was telling her what to do. It hadn’t been a request, it had been a direction, and her hesitation confirmed his belief that she’d never been in the company of a dominant. It also confirmed his suspicions that she longed to experience the joy of submission. Had he met the woman of his dreams? A woman about whom he was quickly developing feelings? A woman who ached to learn what he had to teach? It was almost too much to hope for, and with his wish swimming in his head, he climbed on the bed, positioning his body over hers, resting his knees between her legs and his elbows on either side of her head.
“I’m gonna lower my weight on you,” he murmured. “Let your body totally relax and sink into the mattress, okay, sugar?”
“Okay,” she breathed, but it had been a tentative response, and he moved his lips to her ear.
“Close your eyes. Let your body go limp, totally limp. You’ve got nothin’ to worry about, nothin’ to think about, nothin’ but me, and how good this feels.”
His words wrapped around her like a soft, wool blanket, and she felt herself responding. She sucked in the air, then let it out, and as he lowered himself on top of her, she began to feel it; a release, a giving up, a sweet, delicious surrender.
“There you go,” he whispered, “just like that.”
As his weight descended, she wanted to tell him it was heaven, that it was the most divine thing in the whole world, but she didn’t want to break the magic of the moment by speaking. It was as he’d said. It was just him, and her, melting into each other. A trance had engulfed her, and as the minutes ticked by, she fell deeper and deeper under his spell. When he moved his hands to her wrists and tightly gripped them, a surge of pleasure rippled through her body, and as he shifted his stiffened cock against her inner thigh, she tried to wriggle to bring it against her pussy, but his weight prevented any movement.
“Tell me what you want,” he whispered, his mouth softly sucking her neck.
“You, I want you inside me, I want this, I never want to wake up.”
How easily she had surrendered. A joyous throbbing moved through his loins, and adjusting his hips, he managed to rest his cock between her legs.
“Have you ever been bound in rope?”
The question floated through her head, almost as if it were a dream, and she moaned softly at the thought.
“Picture it, think about how it would feel,” he whispered, tightening his hold on her wrists as he pushed her into the fantasy. “Soft cotton rope, holdin’ you, keepin’ you exactly as I want you.”
A picture began to form in her mind’s eye, and she could see her reflection in a mirror. She was naked, sitting on a straight-backed seat, her knees tied open on its legs, a white cord criss-crossing her breasts, then winding around her body like a coiled spring. She heard herself groan, but it sounded far away, then suddenly, he was kissing her.
His mouth was soft, moist, and warm, and was drifting slowly over hers, bringing her up from her vision, but as she responded, his lips became demanding, and his tongue darted between her teeth. He was consuming her, and as his body lifted its weight off hers, his hands slipped from her wrists, and his fingers were suddenly delving into her pussy.
“So wet,” muttered.