THE WARRIOR
and the
MISCHIEVOUS WITCH 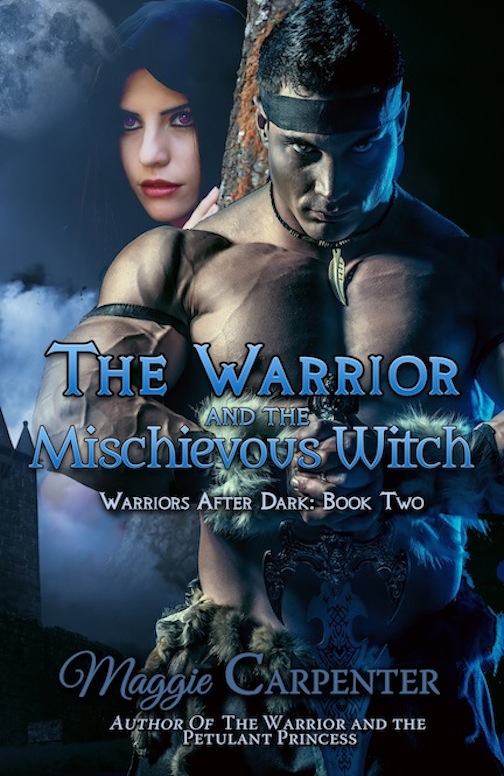 A carefree, playful young witch named Angelica, is returning to her cottage in the woods when she detects the presence of a powerful man. A Warrior of the First Order, Darius Dunworthy, has been sent by the Prince of Zanderone to find her. There is an evil menace terrifying the citizens, and the Prince believes the talented witch can help.

“Some ground rules,” he declared as he continued to spank her. “You will not attempt to cast any further spells on me. Do you promise?”

Though shocked by the spanking and his list of rules, she is even more shocked that he doesn’t fear her, but when she learns they will be guests of Princess Lizbett and Lord Larian, being enamored with the royal couple, she is determined to travel with him.

Lord Larian and Princess Lizbett join them in their hunt for the evil villain, and bring with them all the fiery passion, salacious sex and sizzling spanking they shared in The Warrior and the Petulant Princess, the first book of this scintillating series, Warriors After Dark.

Angelica could not believe she was once again across his knee. He had yanked down her underwear, and his hot hand was slapping her upturned backside.

“You can behave as you wish with other people, but with me you will show some respect.”

“You’ll control that short temper of yours, especially once we’re in Zanderone. Do you understand?”

“No more childish outbursts or pouting,” he continued, dispatching his palm to her sit spot, “and in the house of the Princess and Lord Larian, you will be on your very best behavior, or believe me, I will spank you in their presence.”

“Yes, I won’t hesitate,” he warned, then pausing for a moment he stared at her very pink cheeks. “I believe I have made my point.”

“You will just rest there for a moment, and feel the pain of my punishment.”

“Please, will you rub it?” she bleated.

She could have muttered an incantation as he’d pulled her off Spirit and thrown her over his shoulder, or stopped herself from feeling the sting and faked her way through the entire spanking, but she hadn’t able to bring herself to do it, and with the hot seat spell bouncing back at her she wasn’t sure if it would have worked anyway.

What’s the matter with me? I need to speak to Aunt Namia. I hope she can give me some answers.

The unexpected, soothing caress of his hand elicited a deep sigh, and longing for his touch she spread her legs.

“You’re asking me to touch you,” he mumbled. “I’m not sure you deserve it, and if your pussy is as sharp as your tongue it might well give me a nasty cut.”

“I’ll be good, I promise,” she whimpered.

The temptation of her glistening cunt was too strong, and running his hand over her hot cheeks he continued it down and cupped her feminine charms.

“My, you are not just a mischievous witch, you are a wanton witch. A wanton, wet witch.”

“Ooh, those words,” she breathed.

His cock was standing at attention, and as he slid his finger into her succulent depths and began sliding it in and out, he ached to kneel behind her and plunge his cock home.

“You are so needy,” he murmured. “I will bring you to your moment, but it is not just for your benefit. I need a more temperate companion. The release will calm you down, and that, you naughty witch, is something you need to do very badly.”

“Thank you, Darius,” she stammered, “thank you.”

“Kneel on your hands in knees in front of me, and keep that skirt at your waist.”

He was seated on a fallen tree trunk, and as she crawled off his lap he dropped the front flap of his trousers. Pulling his cock from the confines of his undergarment, he gazed at her reddened moons and slipped two fingers inside her hungry sex. Rubbing himself as he frigged her, enjoying the sight of her swollen pussy lips and the sound of her pleasure-filled moans, he could feel his climax quickly building.

When she let out a wail and thrust back, he chased his orgasm, exploding seconds later with a powerful eruption that rattled his bones. Having nothing with which to clean his hands he rose unsteadily to his feet, and walking the few steps to his horse he pulled his soiled shirt from his saddle bag.

As he cleaned himself up, he glanced across and saw her laying on the soft ground, her skirt still around her waist. Quickly stuffing the shirt in back in the bag, he hurriedly returned and knelt at her side.

“Angelica, are you all right?”

Rolling on to her side she gazed up at him with half-lidded eyes.

“I am very all right,” she sighed. “It’s strange, this peace I’m feeling.”

“Come to me,” he said tenderly, and sitting back he pulled her into his broad chest, engulfing her with his powerful arms.

“Why do I feel this way?” she mumbled.

“A good spanking followed by a release can have this effect,” he replied. “I told you it would calm you down.”

“We don’t always need to know the why of something. Just accept it and be grateful.”

“I am,” she sighed. “I feel so relieved, as though all the tightness has left me.”

“Rest for a moment, then fix yourself, and we’ll continue on to see your aunt.”

Closing his eyes he felt her mold into his body. A warm, comforting light was beginning to dawn in his soul, and he let out a heavy breath.

Is this the end of my years of wanting? Does this adorable, naughty, willful witch hold the key?