I have received a number of requests asking me to post a longer excerpt in addition to the short snippets that have appeared in Saturday Spankings and My Sexy Saturday. I am more than happy to do so.  Thank you for asking, and I hope you enjoy it. 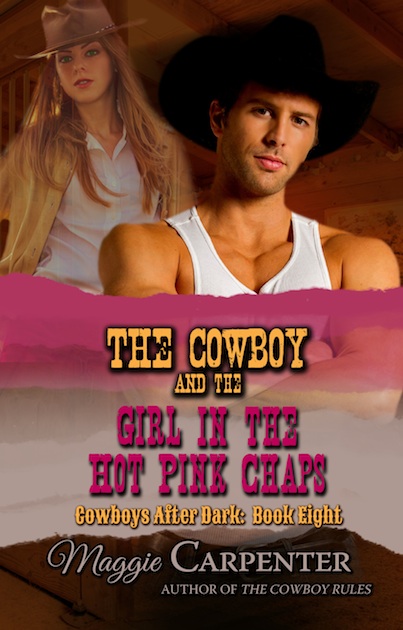 With every tug of her hair, Dusty felt herself sink deeper under his magical pull. He was capturing her, seducing her, tantalizing her. Kneeling in only her chaps, her bottom naked and waiting for punishment, her skin was aching for his touch, and she longed to feel his cock filling her and riding her forward to the brink.

“Please, couldn’t you just make love to me now and spank me later?” she whispered.

He had reached the end of the braid, and was fastening it with an elastic tie.

“No,” he said firmly, “and don’t ask again. I’m going to blindfold you. Close your eyes.”

Just the thought made her gasp, and as the black satin touched the top of her cheekbones her heart skipped, and she gasped again.

“Yep, blindfolds, they can be scary and excitin’ all at the same time,” he muttered as he knotted it at the back of her head. “Swizzle around and face me.”

His hands gripped her upper arms as she turned, giving her a feeling of support, then slid down to her wrists and lifted them up.

“Now I’m gonna make sure you don’t try to interfere when that hairbrush is swattin’ your backside.”

“This will make it easier for both of us,” he said winding a leather strap around her wrists and buckling it closed.

Holding her face between his hands, he brought her lips to hers and softly kissed her.

“I’m gonna sit back on the lounger, and I want you to crawl over me.”

His hand grasped her arm and guided her over his waiting lap, and as she lowered her body on to his thighs he shifted her into position. Lowering her head, she found the fuzzy cover comforting, and when his hand began to caress her upturned cheeks, she took a deep breath and almost relaxed. Almost. She knew his gentle fondling would be short-lived, and soon she’d learn what it meant to be spanked with a hairbrush. She’d heard about it of course. Gossip among the students at the barn, tales of a girl in trouble feeling the swat of her mother’s hairbrush on her backside, but she’d never felt such a thing. She’d never been spanked at all until Patrick had done the honors after the episode with Trixie Davenport.

“I guess,” she squeaked.

Gazing at her pale globes framed by the hot pink chaps, the sight was enough to send a fresh sizzle into his loins. Her bottom looked so beautiful, raised up as it was and waiting for his discipline.

“This view is just as I imagined it would be,” he murmured. “From now on, whenever I have to punish you, you’re to present yourself to me wearin’ these chaps.”

Before she could respond his open palm landed swiftly, kissing her skin with a hot sting, then continued to bounce from cheek to cheek without pause. Burying her face in the fur cover, she let out some muffled yelps then wriggled in protest.

“I’m just warmin’ you up a bit,” he remarked without pausing his hand. “I told you, this has gotta count. You’re not gonna be doin’ foolish things like that again.”

“I want you to remember this,” he said sternly as his hand rose and fell.

“It’s gettin‘ to be a real nice color,” he commented as he stopped spanking. “Feels good and hot. I think you’re about ready.”

He’d left the hairbrush next to him, and picking it up he rested the wooden back on the center of her right cheek.

“Dusty, this is gonna hurt. It’s mean to hurt. It’s a lesson. You understand?”

Tellin‘ me it hurts, askin‘ me to stop, it’s not gonna make a damn bit of difference, and I already know how many times I’m gonna land this hairbrush on your tush. Do we understand each other?”

“All-righty then, bury your face in that cover again. Here we go.”

He circled the polished wood across her skin for just a moment, then raising it up just a few inches, he flicked it down. Dusty let out a wail and kicked her feet, but Matt didn’t wait for her to settle before repeating the swat on her opposite cheek. She yelped again, and he quickly brought it to her sensitive sit spot just above the top of her chaps, smacking each side several times before returning to the center of her bottom and dispatching several sharp spanks before pausing. She was gyrating her hips from side to side, bleating into the lounger.

“If I have to spank you for this again,” he said sternly as he rubbed the sting, “I’ll double the count and make the swats harder. You understand me?”

“You will not ever,” he decreed landing an additional, hard swat on each cheek eliciting a loud yowl, “put yourself in the company of anyone, man or woman, who could cause you harm, not in any way, are we clear?”

“Not in public, or private, or anywhere, and no ridin’ Licorice where you might be spotted by that lunatic. You sniff danger, you bolt. You’re not sure, you bolt, and you call me, no waitin’. You call me before anyone else.”

Sighing heavily, he continued to rub until she settled, then slipping his hand between her legs he searched her wetness.

“That spankin’ sure made you wet,” he crooned. “I don’t know why it makes want you so badly,” she bleated “I put this soft cover on this lounger ‘cos I knew your butt would be sore, but I’m thinkin’ I wanna take you from behind, and I wanna take you right now. Crawl off me and get on your hands and knees.”

In spite of, or perhaps because of her burning bottom, her cunt was craving his cock, and as she scrabbled forward she felt him kneel behind her. As his fingers pushed into her saturated channel, she let out a cry and arched her back, begging for his entry.

Gazing down at her scarlet skin, her legs encased in the pink leather all the way up her thighs, he felt a rush of energy. Grabbing the condom he’d left on the small table he quickly sheathed himself, and resting his hands on her hot cheeks he plunged forward.

Her visions of being gently laid on her back, his mouth softly nibbling her nipples, and his hands tenderly caressing her, had completely evaporated. She wanted his cock to ride her, to take her, to possess her. He was clutching her hips, and plunging himself in and out of her succulent depths, and she suddenly had a revelation. He was possessing her just as she wanted, but it was more than that; she was his to do with as he wished.

Matt could feel her surrender. It wasn’t just her body yielding to its carnal need, but her being, her heart and her soul, was submitting to him.

“Yes,” he growled, and closing his eyes, feeling her submissive energy cloak him, he let his cock fire.

The sharp convulsions jolted them both, and as the climax delivered its shuddering waves, uniting them in a mutual release, hot tingles sparkled through his limbs. Slowly they dissipated, and flaccid and drained he slipped out and fell next to her.

She was breathless, repeating his name, and sliding the blindfold from her eyes, and unbuckling the leather strap from her wrists, he brought her into his arms.

“Matt, I felt something so big,” she panted as she nestled into him. “I don’t mean the orgasm, I mean…how I felt. How I feel,” she sputtered.

“I know, baby, and you can tell me about it later. You just rest and catch your breath right now.”

Holding her in his arms, Matt gazed across the lake at the heavy moon.

You’re not the only one who surrendered, Dusty girl, I think I just lost my heart to you.