While I very much enjoy participating in the blog-hops, sharing snippets of works in progress and recently released books, I was reminded, that as tasty as these tiny tidbits are, they are still tidbits.  It’s been a while since I posted a true excerpt, and after a number of requests, please find below one of those tidbits in full excerpt form. 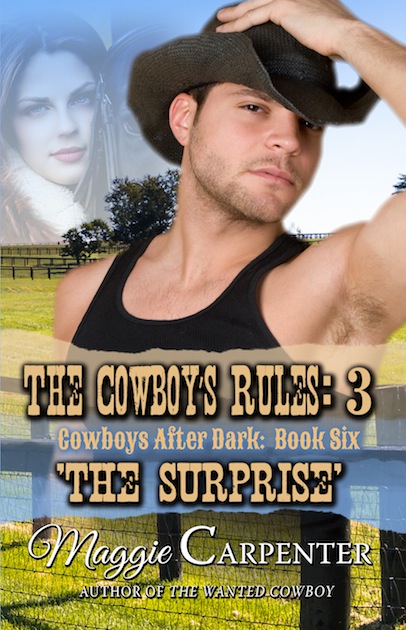 Standing up from the table Chad strode to the refrigerator and pulled out another beer. Cassie, having no idea what to say or do, stayed where she was, eyes fixated on the table top.

“I know why you did it,” he said, his voice calm and even.

Turning around she looked across at him.

“Yep. You felt me slippin’ away…us…slippin’ away. You saw me driftin’ into a quagmire, takin’ on too much, gettin‘ too stressed. You wanted me to get back to what I love doin’…be the man you met a year ago. Am I right?”

“Uh-huh,” she nodded. “Things were upside-down and getting worse. I thought if you did your show again it would help you, and it has.”

Chad put his bottle of beer on the counter, moved slowly across to her, and reaching down he pulled her to her feet, gripping her tightly by her upper arms.

“I should spank you into next week for pullin’ a stunt like this,” he growled, “and I would if I wasn’t so hell-fired grateful that you did.”

“Damn, what you did…what you’ve done…you are one amazin’ woman, you know that?”

“Not really,” she muttered.

“Now that I will spank you for. You told me a year ago that I’d saved you. You remember?”

“I think you just saved me, so don’t let me hear you say you’re not somethin’ special, ‘cos, honey, you are, you’re somethin’ real special,” then moving his hands to clutch her hair, he locked her eyes, “and don’t you forget it, you hear me?”

His eyes were piercing hers, and for a moment she couldn’t breathe, then he lowered his head, and brushing her lips he kissed her lightly.

“I don’t even know…” he began, then suddenly letting out an odd grunt he lifted her off her feet, carried into the bedroom and laying her on the bed he rested his body on top of her.

Abruptly moving his lips to her neck he began nibbling, sending shock waves of need through her sex, then sliding down her body he unzipped her jeans and pushed them hurriedly down her legs.

“You…” he growled, hastily dropping his own jeans to rest around his thighs.

“You, be quiet,” he said huskily, “unless you wanna scream, then you can scream.”

Placing his cock against her he thrust forward and began fucking her with gusto, his belt jangling as he stroked. He was taking her, owning her, possessing her, and she cried out as his cock thundered forward. His lips were devouring her neck, and when his hands dropped to her chest and ripped open her shirt, popping the buttons with one, fierce tug, she heard herself cry out in alarm, then moan with pleasure as his mouth began consuming her breasts.  Grabbing her wrists he pulled them up, laying them on either side of her head, pinning them into the mattress, and gazing at her he paused, locking her eyes.

“You feel me inside you?” he panted.

“You know where it comes from?”

“From your love, your heart,” she breathed.

“Why are you telling me this?” she mumbled, feeling a wave of emotion.

“Because what you did, and whatever it is that you’re doin’, it’s from, your love, your heart.”

“And that makes me crazy for you…crazy in so many ways.”

His mouth moved across hers, and as his cock started anew, stroking her with slow, determined thrusts, she felt his need for her as clearly as she felt hers for him. She raised her chest, begging for his lips, moaning as she felt the shadow of her climax.

His words sent a sparking surge of energy into her sex, and when he accelerated, pumping his cock with a powerful urgency, she felt the tingling promise.

“Now, Cassie,” he commanded, “you come for me right now.”

His voice echoed around her brain as the orgasm began shooting pins and needles through her limbs. She could feel his cock exploding inside her as his fingers grasped her wrists…then moments later, flaccid and spent, he fell beside her, his heart hammering as he tried to catch his breath.

“What was that?” she gasped.

“Ever hear of Huey Lewis and The News?” he panted.

“What? Of course,” she stammered, rolling into him.

“That was the power of love,” he panted. “Listen to the lyrics sometime.”

The power of love is a curious thing
Make a one man weep, make another man sing
Change a hawk to a little white dove
More than a feeling that’s the power of love

Tougher than diamonds, whips like cream
Stronger and harder than a bad girls dream
Make a bad one good, make a wrong one right
Power of love will keep you home at night

And it dont need money, dont take fame
Dont need no credit card to ride this train
Its strong and its sudden and its cruel sometimes
But it might just save your life

It dont take money, dont take fame
Dont need no credit card to ride this train
Tougher than diamonds and stronger than steel
You wont feel it when until you feel